If last week’s show was anything to go by, then one could assume that this weeks episode of NXT UK, featuring the Heritage Cup Finals, could possibly have been one of the most anticipated wrestling shows in recent weeks.

Last week we witnessed Joe Coffey continuing his path of destruction. We were also made aware that Mark Andrews and Flash Morgan Webster were out for blood on a betrayal-driven rampage. Most memorably, we had last weeks main event in which Piper Niven challenged Kay Lee Ray for the NXT UK Women’s Championship in a Falls Count Anywhere match. As we are all aware, things were looking pretty good for Piper Niven, that was up until Jinny got involved and aided Kay Lee Ray to victory.

I’m James from Sports Obsessive and that’s enough of my excitable faffing. Let’s get to the action!

We were warmly welcomed back into the BT Sport Studio in London as Amir Jordan made his way to the ring to face off against the NXT Cruiserweight Champion, Jordan Devlin, with the Championship on the line. Jordan was hoping to become the first Pakistani born NXT UK Champion. However, Devlin had been out of action for 8 months due to the global pandemic. Was Jordan Devlin Ready?

Amir Jordan vs Jordan Devlin for the NXT Cruiserweight Championship

As the match begun, we could already see what this opportunity meant to Amir Jordan. Jordan had a lot a fight from the word go but Jordan Devlin was clearly proving a point in this match and that was that he is the definitive NXT Cruiserweight Champion. Amir Jordan continued to fight back and came out with a lot of fire and passion. Devlin was working at more of a methodical pace, you could see that this man had a chip on his shoulder. Amir was doing a great job of proving his worth during this match and fought his heart out but Devlin was always a number of steps ahead, Devlin was taking his time, every move made something. 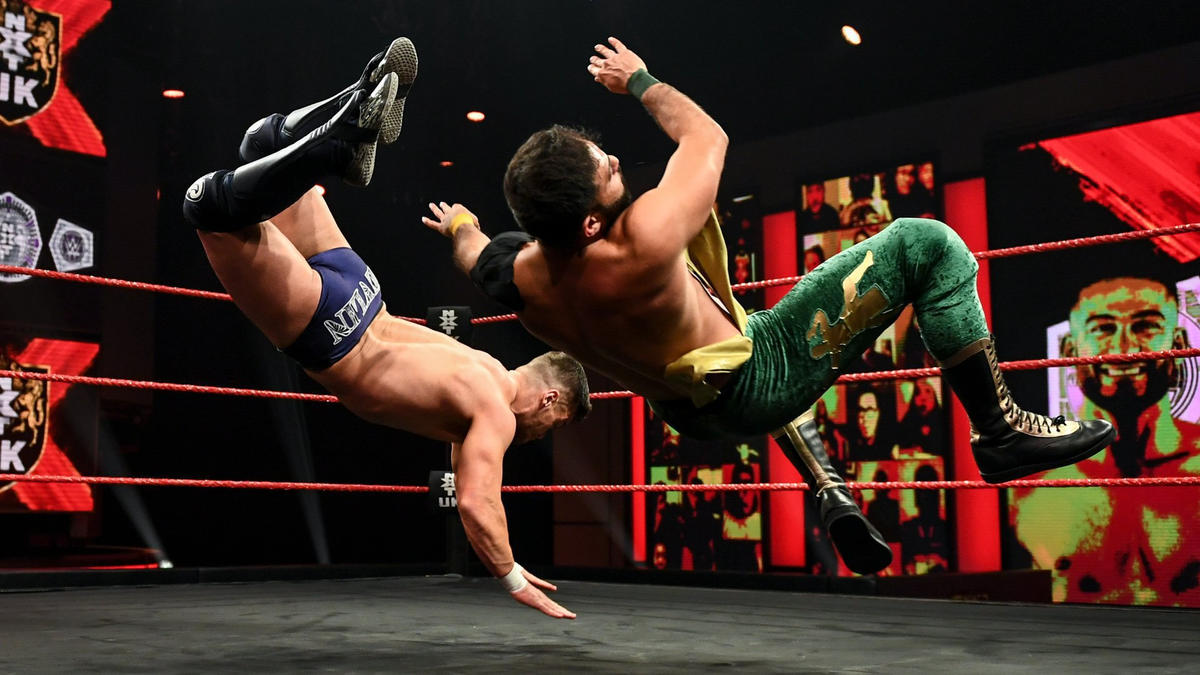 This really was a great opening match and depending on what way you looked it, it had ticked all of the boxes to categorize it as one of the best wrestling matches of the past number or weeks. As Devlin continued to beat down Amir Jordan, he was smug but what more could you expect from “The Irish Ace”, he gets the job done. I don’t want to downplay Amir Jordan at all, he was great in this match and fired on all cylinders. Even delivering a suicide dive at one point during the match, making the statement that he was not afraid to do whatever it takes to succeed. Unfortunately for Amir Johnson, after a insanely entertaining battle, he found himself tapping out to a four-leafed-clover submission at the hands of the NXT Cruiserweight Champion.

Mark Andrews and Morgan Webster Take Matters Into Their Own Hands:

Eddie Denis was entering the arena alongside ‘The Hunt’ and was asked if he has anything to say in reference to the choice words that Mark Andrews and Flash Morgan Webster had for them last week. Without even being given a change to breath, Andrew and Webster pounced on them all in an instance. Webster dove over a table in his attack, meanwhile Andrews had grabbed a trash-can and pummelled it through the others scull. All men involved had to be restrained.

Andrews and Webster closed this segment, reminding me of Triple H and Shawn Michaels back in 2002 when Michaels returned for a unsanctioned match at SummerSlam. This was the same kind of energy and the emotion that we were seeing was purely driven by betrayal.

After causing at scene during last weeks main event, Jinny was back. You had to wonder, would we see Piper Niven making an appearance? As for now, Jinny was taking on Isla Dawn in singles action. The commentators were playing up the fact that Isla needs to pick up a victory, whilst complimenting her. I’ve said it before and I’ll say it again, Isla Dawn will be the NXT UK Women’s Champion one day, as for now, she had to concentrate on the vindictive, Jinny, who was so brutal in this match and relentless in her tactics to pick up the victory. Dawn was fighting back but was decimated by Jinny. After being grounded for quite a while, Isla Dawn build up some moment and proceeded to kick the absolute tar out of Jinny.  Dawn was a roll for a period of time, connecting double-knee strikes to ‘The Fashionista’ Jinny. It was only a matter of time however, until Jinny recaptured control of the match and she may it look way too easy. 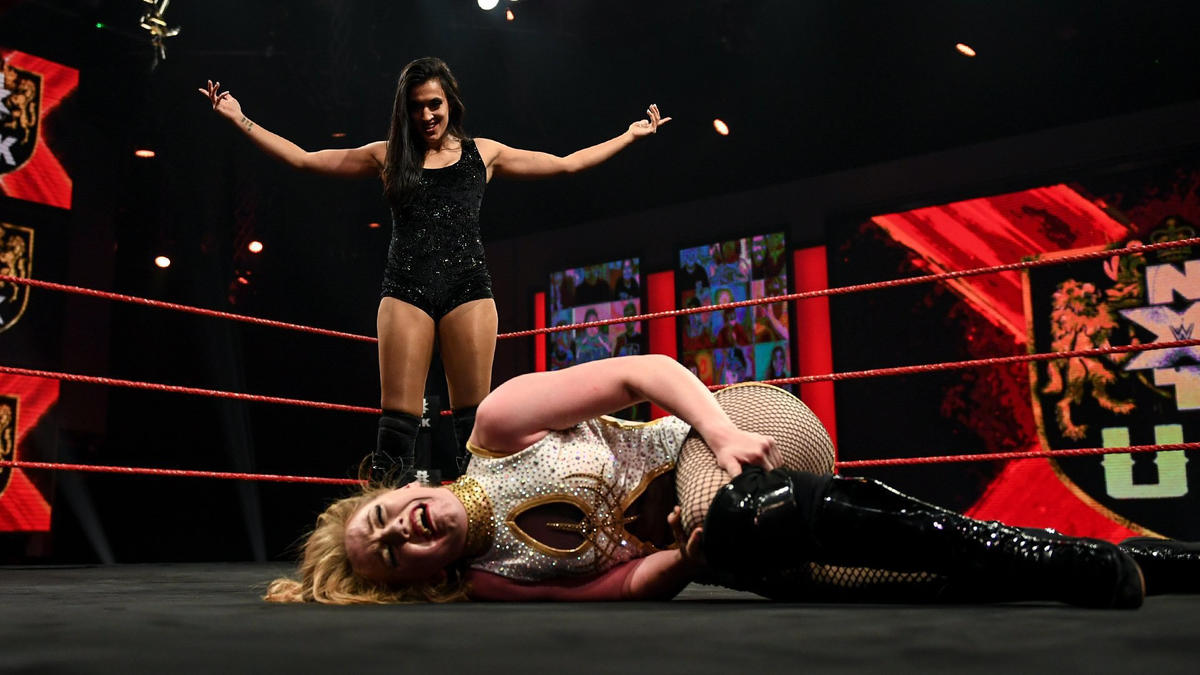 Jinny revered a grapple for Dawn and drover her opponents face right into her knee. That should do it. Keyword being should. The thing is that Isla Dawn is incredibly resilient. Dawn managed to lock Jinny into the Tarantula using the ropes as leverage. Dawn scaled the ropes but unfortunately, after a missed opportunity, found herself locked into a submission move at the hands of Jinny. Jinny picked up the victory is what was a really impressive match with a great story being told. In short, Dawn needs to pick up victories and that Jinny is pure evil and has no empathy for anybody she faces in NXT UK. It’s a great balance.

After the match, Jinny sent a very short but direct message to Piper Niven.

Jinny’s saga with Piper Niven is just beginning and I for one, cant wait to see how it all unfolds.

Trent Seven, a man who has been part of NXT UK since its inception, was determined to proudly hold the prestigious cup but first, he had to go through the hard-hitting Spaniard, A-Kid. A-Kid was impressive from the jump and was implementing his MMA experience in hopes to pick up the victory. Seven managed to lock in a number of submissions early on but A-Kid managed to muscle out of harm’s way each time. This match was broken up into a block of rounds, with each round lasting for three minutes. The first round ended with both the veteran and the relatively newer, A-Kid coming off as evenly match. Seven looked very impressed and the two even shared a moment of respect for the other. Soon enough, the moment of respect had passed and the second round commenced. The second round showed us a showboating Trent Seven and an aggressive A-Kid. 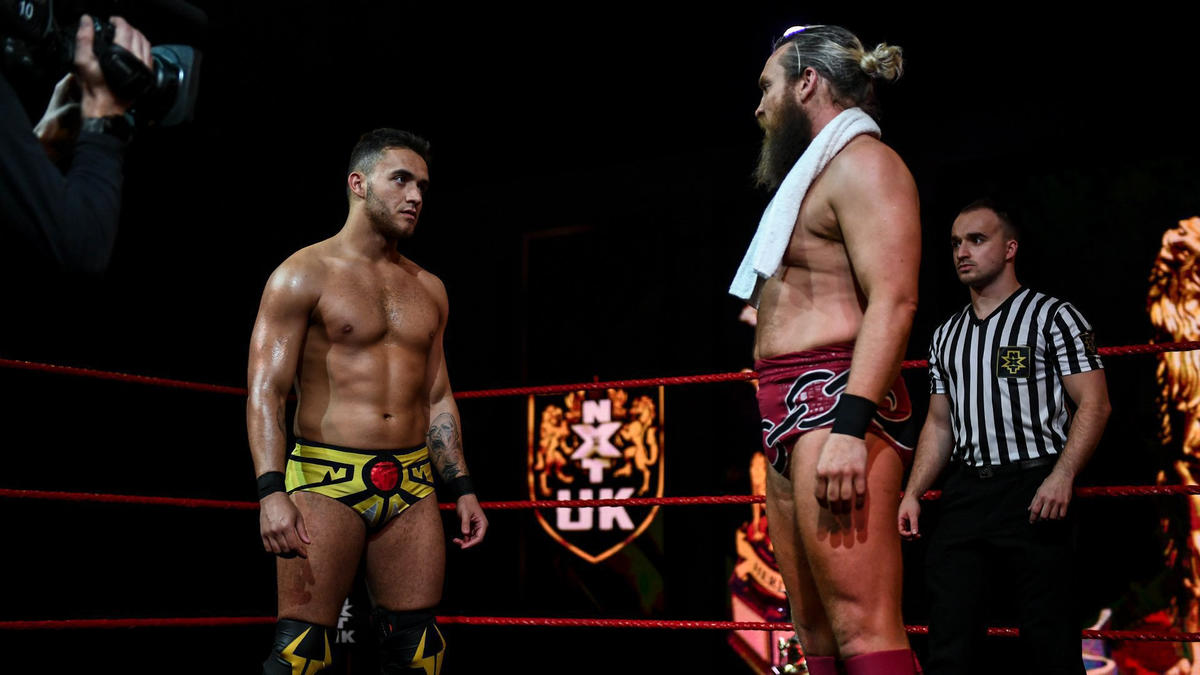 Trent Seven went on to control the narrative of the second round, not allowing A-Kid to much defence, that was until the round was almost up. A-Kid was working specific body parts, in hopes to target in on them later in the match. The third round commenced and both wrestlers were fired up. The two shared a flurry of chops a kicked to the chest, especially A-Kid, who managed to pick up the first victory in this NXT UK Heritage Cup final. After picking up the first pin fall, momentum was certainly on A-Kids side and he kept that running as he charged towards seven. Things were not looking good for the NXT UK veteran, Trent Seven. This match was very impressive as we saw A-Kid controlling Trent Seven and at times Seven seemed helpless, which is a rare sight. With ten seconds left on the clock, seven managed to escape from a submission and slap A-Kid to the mat but could not capitalize and attempt a pin fall. The fifth round was now underway and Trent Seven was extremely frustrated, while A-Kid was feeling the pressure. This round showed Seven managed to build up so momentum and just as A-Kid attempted an aerial attack, Seven met him atop the turnbuckle and tried for a Super-Plex with just under ten seconds left on the clock. Somehow, A-Kid reversed mid-manoeuvre and landed a variation of a cross-body slam. This match had been incredible up until this point, both wrestlers had given it their all but Seven needed to dig deep if he was going to at least tie in this bout. The sixth round had begun and this was a fight! Seven and A-Kid gave off a feeling of desperation as they were in an absolute war. Seven had multiple close pin falls count but A-Kid managed to kick out each time. In a desperation attempt, Seven knocked A-Kid inside out with a clothesline and eventually picked up the pin fall. The sixth round saw Seven managing to tie things which meant that Sudden Death would commence. 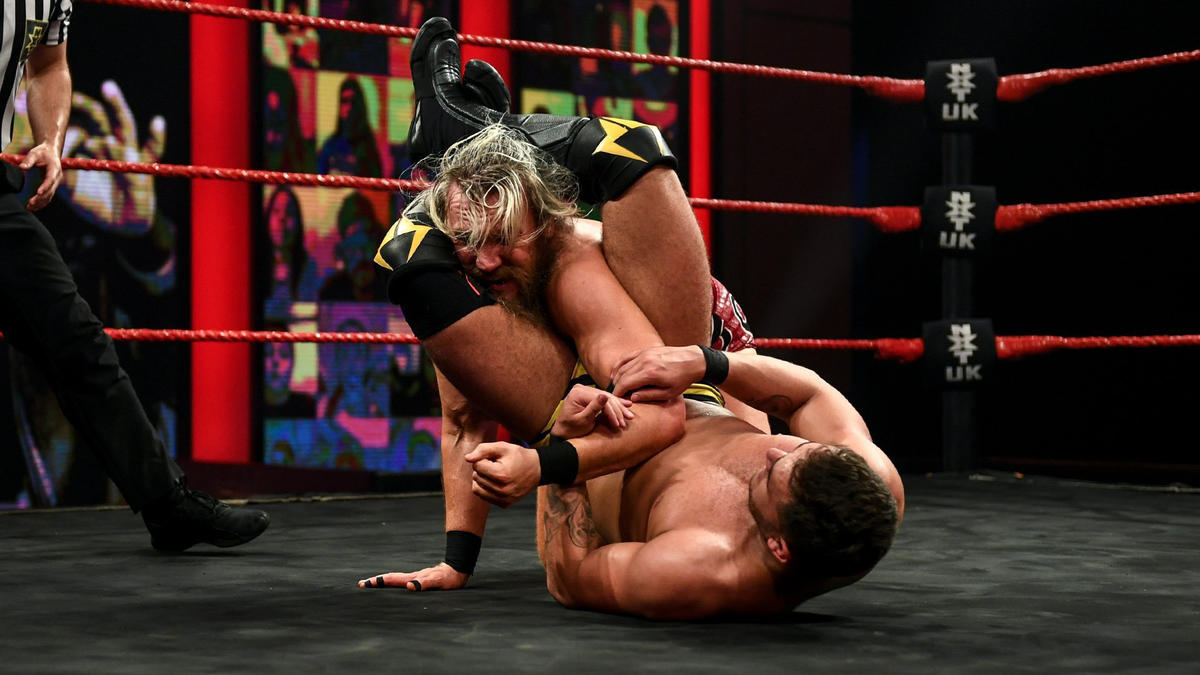 Once Sudden Death began, we saw what this tournament meant to these superstars. Sudden Death meant that there would be no time limit. Seven brought the fight to the outside, where he laid A-Kid out up until the point that it was looking as if A-Kid were to be counted out, A-Kid managed to get back to the ring on the 9 count. This match didn’t even have to end for my to make the statement aloud that this has been my favourite match of the year. After a hand fought battle, Seven found himself locked in an arm breaking submission and was forced to submit! A-Kid has won the NXT UK Heritage Cup. Aside from possibly being the match of the year, one of the greatest things that happened here was that Trent Seven graciously handed the NXT UK Heritage Cup to A-Kid.

If you read last week’s NXT UK article, you would have noticed that I stated that it was so good that it felt like a Pay-Per-View and I wondered how they would top it, Well, here you have it. NXT UK knocks it out of the park once again. From the ruthlessness of Jordan Devlin as he defended his NXT UK Cruiserweight Championship to Isla Dawn falling at the hands of ‘The Fashionista’ Jinny (who is not yet finished with Piper Niven) to Mark Andrews and Morgan Webster who are on The Hunt for redemption. Finally Trent Seven vs A-Kid. I’ll say it one more time, match of the year candidate. This weeks show was very well played out. Do you agree or disagree with me? Let me know in the comments section and I’ll see you back here at Sports Obsessive next week.