On NXT this week, the NXT Women’s Champion Io Shirai was set to face the dangerous challenge of Tegan Nox. But before we get to that, let’s run down all the action on the night!

NXT started off this week with the new NXT Champion, Keith Lee, addressing the NXT Universe. Lee is the North American Champion and the NXT Champion, and now has a massive target on his back. Lee started off by basking in his own glory and deservedly so. Lee brought up the fact that the past number of months have been difficult for us all and explained that there is something so incredibly special about NXT. Lee added that he is not in disbelief and that he has celebrated victory, but is now back to business. Lee continued by thanking those who have believed in him in his journey of becoming a pro wrestler. Lee also thanked a more familiar name, Dominik Dijakovic.

Lee called Dijakovic to the ring and proceeded to reflect upon the epic rivalries that the two have shared in NXT. Lee announced that he had spoken to NXT General Manager William Regal and they agreed that the first challenger to Lee’s Championships should, in fact, be Dominik Dijakovic. Dijakovic gracefully accepted the match after being persuaded to accept by Lee himself. This was short notice for Dijakovic but was also a great display of respect between the former foes.

The first match of this week’s show was a singles match between Priest and Grimes, which looked very promising from the first bell. The match exploded, with Grimes looking to get a cheap shot in on Priest. Priest, however, side-stepped Grimes and did not even give his opponent the opportunity to catch his breath. After a quick brawl outside of the ring, Grimes found an opening and delivered a strong forearm strike to Priest, which gave him the chance to gain the upper hand. 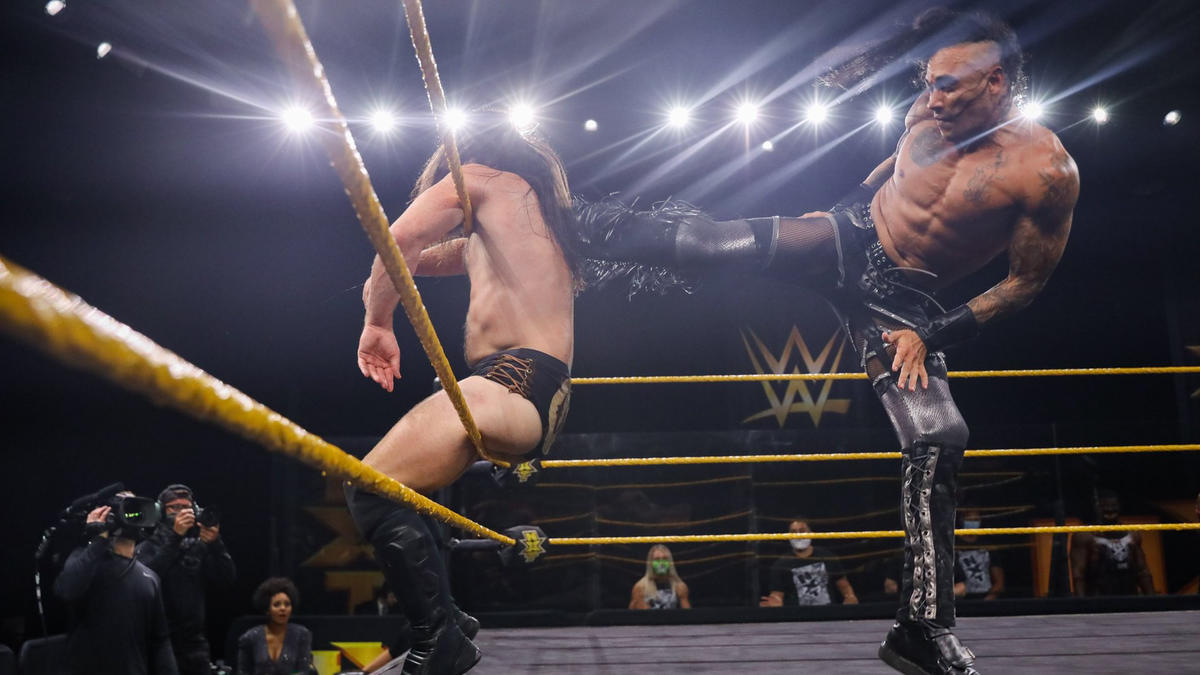 When NXT returned from commercial, Priest was laying into Grimes, turning him inside out with a nightmare of a clothesline. Priest went as far as delivering a Razor’s Edge to Grimes from the outside onto the ring apron. After an unexpectedly impressive display of retaliation, Priest hit Grime with The Reckoning, a strong DDT with his opponent’s legs laid against the second rope. Seconds after planting Grimes’ head into the matt, Priest picked up the three count victory!

The next match of the night had Blackheart squaring off with Hartwell in singles competition. Last week on NXT, we saw Blackheart running Robert Stone over with her tank and the commentary team were making sure that we did not forget! This match started off strongly, with Indy Hartwell taking control of the more established Shotzi Blackheart. Hartwell continued the attack by delivering sidewalk-slams, followed by a number of submission attempts. 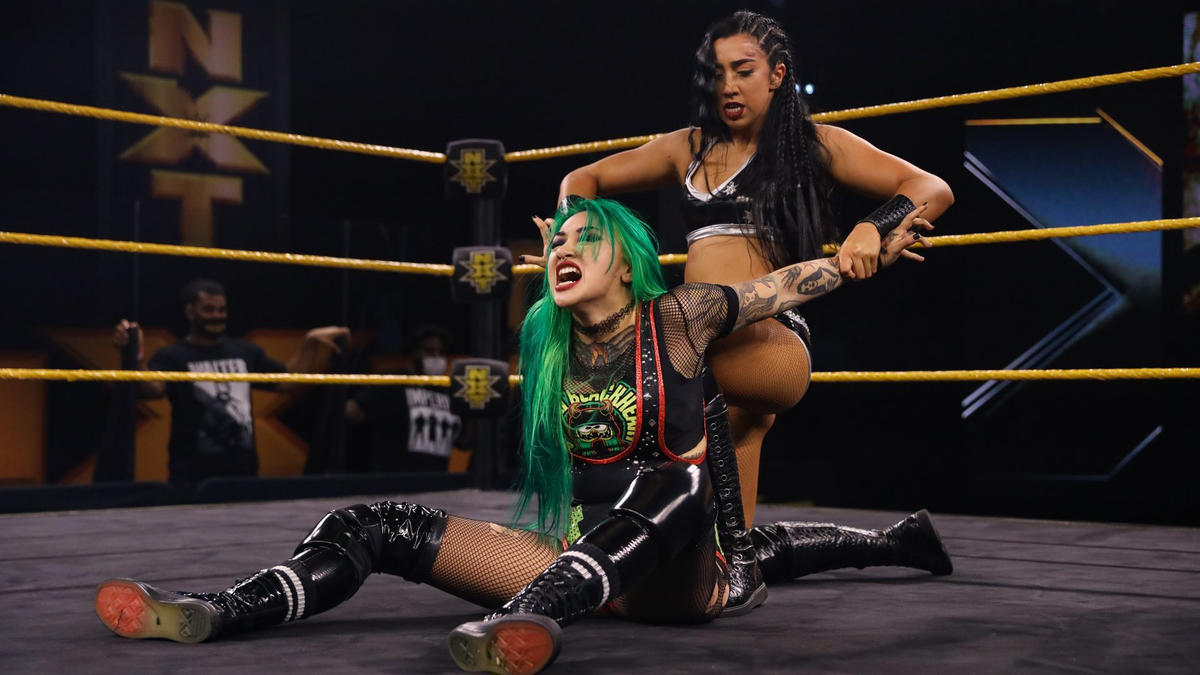 Blackheart shot back with several kicks to the face of Hartwell and, at this point, we saw Robert Stone limping his way down to the ring. Blackheart was on the verge of putting Hartwell away but, as Stone was distracting the referee, Aliyah appeared out of nowhere and got involved in the action, leading to Hartwell taking advantage of the distraction and picking up the pinfall victory.

As we learned earlier in the night, a classic NXT rivalry was to be reignited, as Keith Lee challenged Dominik Dijakovic to a match in which he would defend both his North American and NXT Championships. Just one week after defeating Adam Cole (Bay Bay), Lee was proving to be a fighting Champion.

The match started off with the two men locking horns and matching strength. These men know each other incredibly well, so we knew this was going to be interesting. Dijakovic continued to impress Lee with his speed and quick wit, but this also exposed a weakness in Dominik. As Dijavokic went to shake Lee’s hand mid-match, Lee apprehensively gripped Dijakovic’s hands and pulled his opponent in for a sleeper hold. 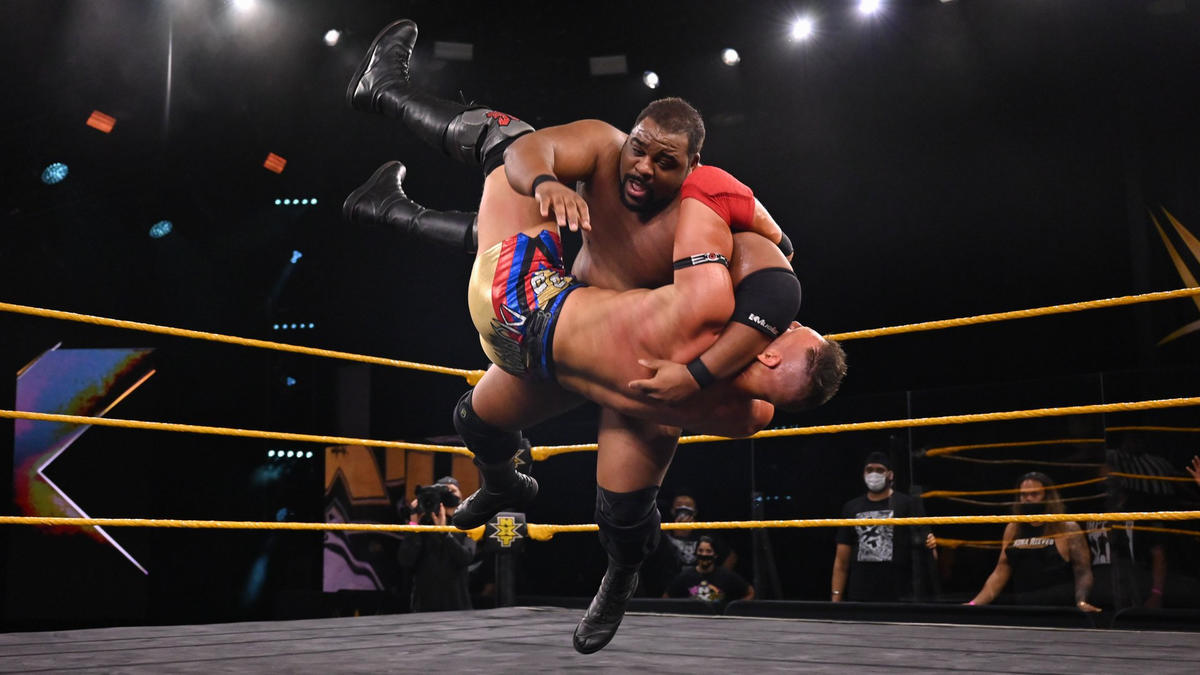 Later in the match, Lee hit Dijakovic with a double-handed chop to the chest, knocking his opponent to the mat instantly! When NXT returned from commercial, Dijakovic had successfully locked a headlock onto Keith Lee but Lee was soon to reverse from the sticky situation he was in. Lee showcased his strength and managed to gain the upper hand, proceeding with a number of shoulder tackles to Dijakovic before delivering a vicious left hand, absolutely shaking his opponent up.

The match came to a close as Lee continued to inflict a serious amount of damage to the challenger. Lee finished things by reversing a diving attack from Dijakovic, hoisting his opponent up for the Big Bang Catastrophe. Lee picked up the pinfall victory and successfully retained both the North American and NXT Championships.

After the match, Lee and Dijakovic embraced, showing the highest level of respect that they hold for one another.

Then, Scarlett appeared in the shadows of the NXT walkway. 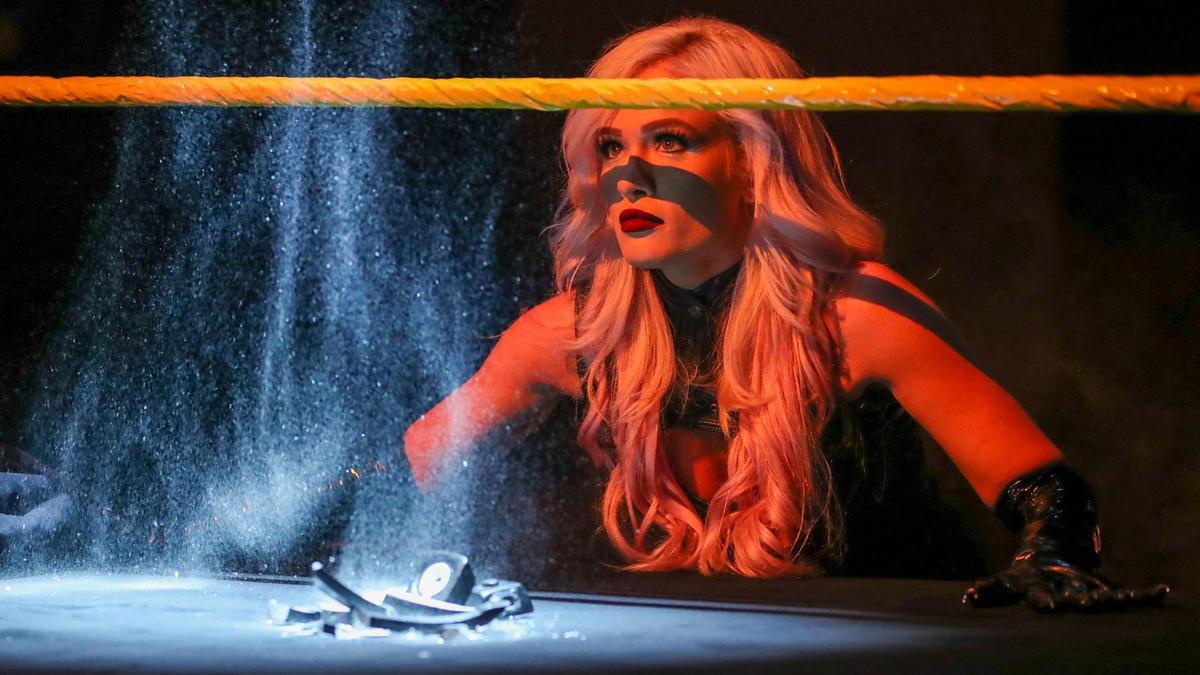 Scarlett slowly walked through the shadows towards the ring, holding a mysterious bag in her hand. When she reached the ring, Scarlett revealed it’s contents, delivering a message to the NXT Champion on behalf of Karrion Kross.

Class was now in session. Thatcher has recently been seen in several vignettes, educating others in the art of submission wrestling. Thatcher was out to make an example here of Denzel Dejournette. This match was very catch wrestling oriented, with Dejournette temporarily keeping up with Thatcher. 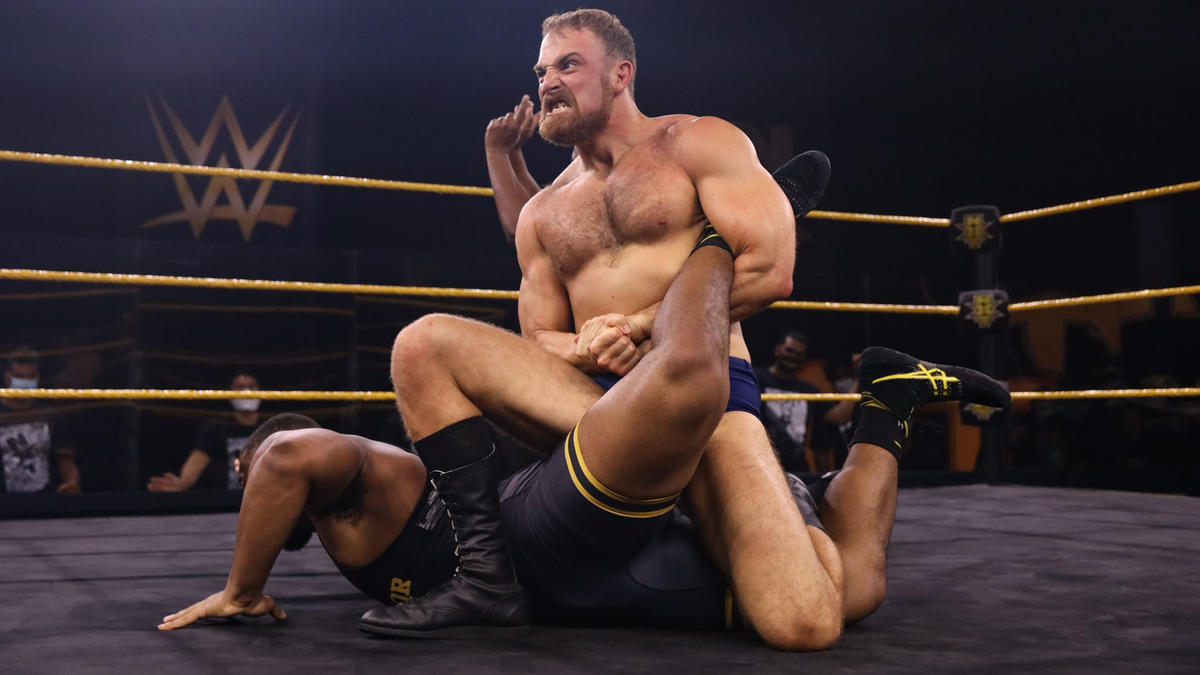 While the match was very intense and impressive, It was not very long. Thatcher soon locked in a submission move and gave Denzel Dejournette no other option but submit. Thatcher picked up the victory via submission.

Seconds after the bell rang, the man who has recently been the subject of Thatcher’s rage, Oney Lorcan, bolted to the ring to get his hands on Timothy Thatcher. Lorcan cleared Thatcher out of the ring and looked like he was ready to kick ass. This rivalry is going to be very exciting to follow!

This week’s Main Event was for the NXT Women’s Championship.Tegan Nox recently earned the opportunity to face Io for the Championship, and this was her shot. Nox was more ready than she had ever been for her first opportunity at the NXT Womens Championship. Nox wouldn’t even let the announcer do her job here, as she demanded the match start immediately. The fire of Lady Kane was burning through and she was out for blood!

The match officially began. Io looked to take to the sky early on in the match but Nox continued to ground her and gained momentum early on. Nox followed up with multiple roll-up attempts, doing everything she could to keep the physical and mental advantage in this match. When NXT returned from commercial, Nox was in the middle of delivering a flurry of European Uppercuts to the NXT Womens Champion.

Shirai made her way back into this match by being a step ahead of Tegan Nox and started to drive her opponent headfirst into the second turnbuckle. Shirai proceeded to whip Nox down to the mat and, at this point, Shirai was in full control. The action soon found its way to the outside of the ring once again, where Shirai had Nox up against the steel steps and charged towards her with a running double-knee strike. Lucky for Nox, she moved out of the way just in the nick of time! Nox had an opening here that could have been her chance at NXT gold. From the Valleys to the Performance Center, Nox was well aware of the importance of her next move. 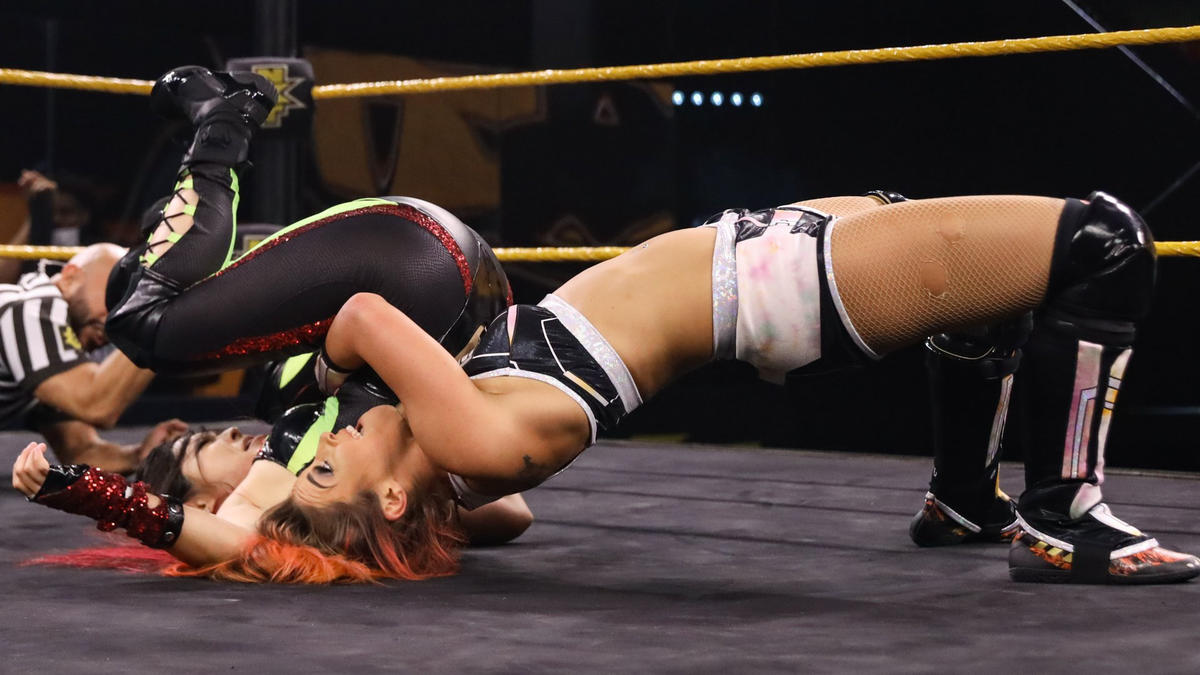 The two women were now in the middle of the ring, trading blows to the faces of one another. Shirai somehow transitioned into the Tiger Driver and delivered a monumental back-breaker to the challenger. Shirai looked to tweak her knee in the process! Nox knows a lot about Knee injuries and tried her best to take advantage of this, hoping to follow in the Championship footsteps of her heroes ‘The Big Red Machine’ Kane and Molly Holly.

Nox slammed Shirai down to the mat and delivered a diving cross-body slam onto Shirai but, miraculously, the Champion stayed in this match and kicked out at two! Nox knew she had to do something to keep this thing going. Nox channelled her inner Lady Kane and hit Io Shirai with a Chokeslam from Hell! Shirai kicked out at two again! Shirai was not letting go of her Championship, as Tegan Nox continued to fight for her life. In the closing moments of this match, Shirai managed to get Nox in position in the corner of the ring and delivered a running double-knee attack to the chest. Shirai followed up with her Tiger Feint Kick, paying homage to the master of the 619, Rey Mysterio. Shirai then jumped back atop the turnbuckle and delivered a mighty diving dropkick to the heart of Tegan Nox. 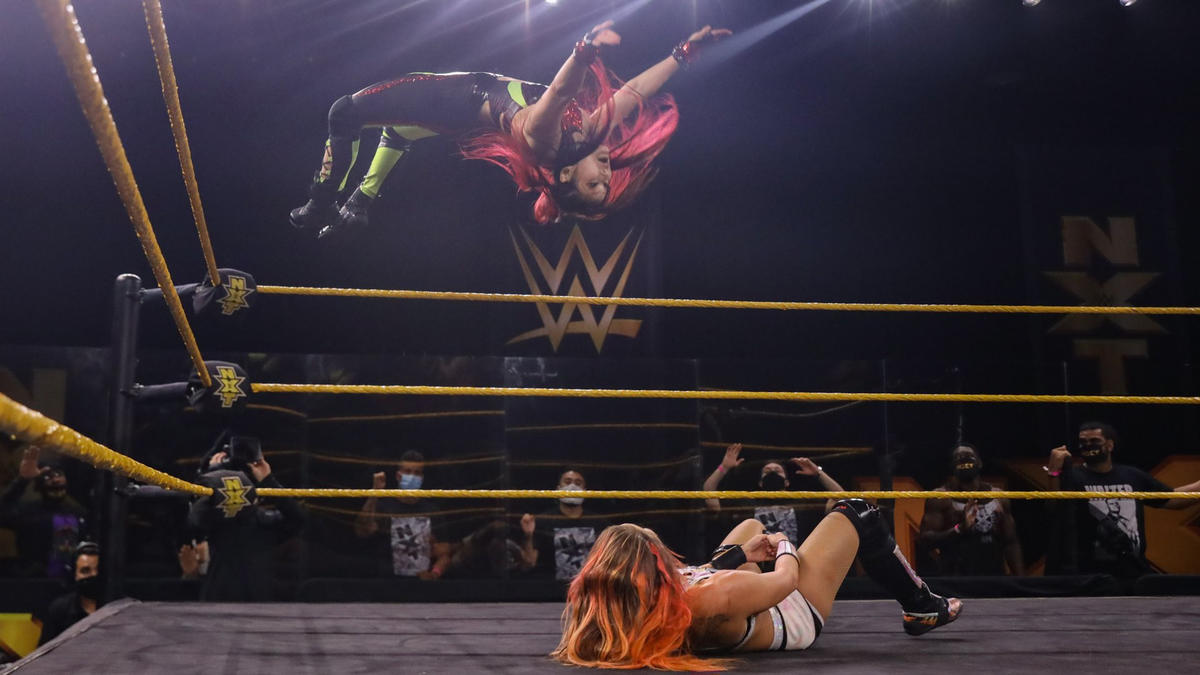 Shirai, looking to put an end to Nox’s dream, went for the cover, but Nox kicked out at two! I don’t know how, I don’t care how, I just know that Lady Kane was not going to give up! Nox superkicked Shirai in the injured knee then planted the Champion down to the mat. Nox was quick to scale the turnbuckle, which could only mean one thing. With the last ounce of fight and passion that she had after this gruelling battle, Nox stood atop the turnbuckle and hit Shirai with the Molly-Go-Round, clearly paying homage to the great Molly Holly; Tegan Nox was going to do it! Nox dove straight into the pin-fall, One-Two!.. and Shirai kicked out once again! Nox was gearing up for the Shiniest Wizard and was half a second away from striking gold, but Shirai avoided disaster with a palm strike to the face of Nox in perfect timing. Shirai seemingly levitated to the top rope and delivered her picture-perfect moonsault. One-Two-Three!

Io Shirai retained her NXT Womens Championship against Tegan Nox in what has got to be a match of the year candidate. Nox fought tooth and nail in this match, but this was Io Shirai’s night.

Io Shirai was making her way to the top of the ramp as NXT was about to go off the air. Then, from the right-hand side of the ring, came Dakota Kai at the speed of light, kicking Shirai right in the head! Kai was left standing over the NXT Women’s Champion mere seconds before NXT went off the air! 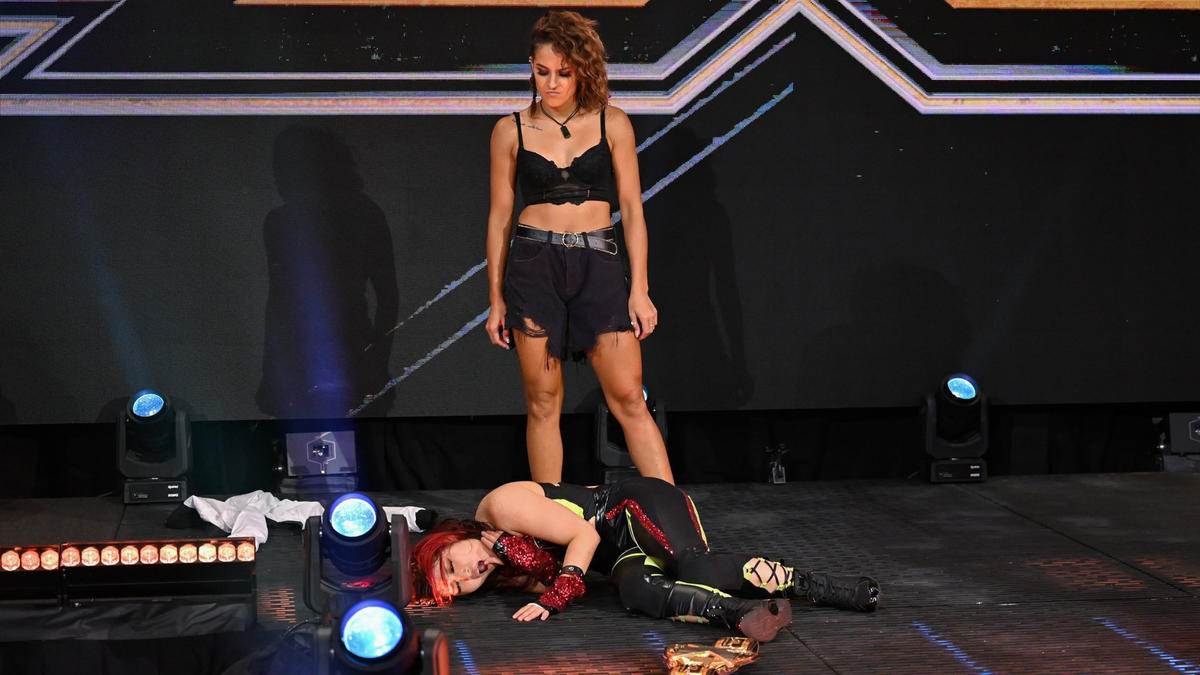 It’s clear Kai wants a piece of Shirai right now, but the women’s division in NXT is really on fire right now. With the showing that Nox displayed on this show, you can be sure that this is not the end for Tegan Nox. Rhea Ripley has washed her hands of Robert Stone and Aliyah, so you can bet your bottom dollar that Ripley will interject herself into the Championship picture; I guess it will only be a matter of time before we see how this all unfolds.