NXT was back on our screens this week and General Manager, William Regal opened this show by introducing Keith Lee. Lee expressed that life is about making the most out of opportunities. Keith Lee made the decision to relinquish his North American Championship. This decision was influenced by Lee’s desire to create opportunities for other NXT talent.

Lumis and Dain kicked off this week’s edition of WWE ‘s NXT. Lumis was full of mind games as usual as he literally slithered around the ring, trying to psychologically intimidate Killian Dain. Dain however, is not a man that you can easily push around and is incredibly thick-skinned. Dain quickly brought the fight to Lumis and had Lumis in a position that we rarely see him in. Lumis usually gets in the heads of his opponents and quickly puts them away. Lumis clearly needed to use a different approach this week on NXT. 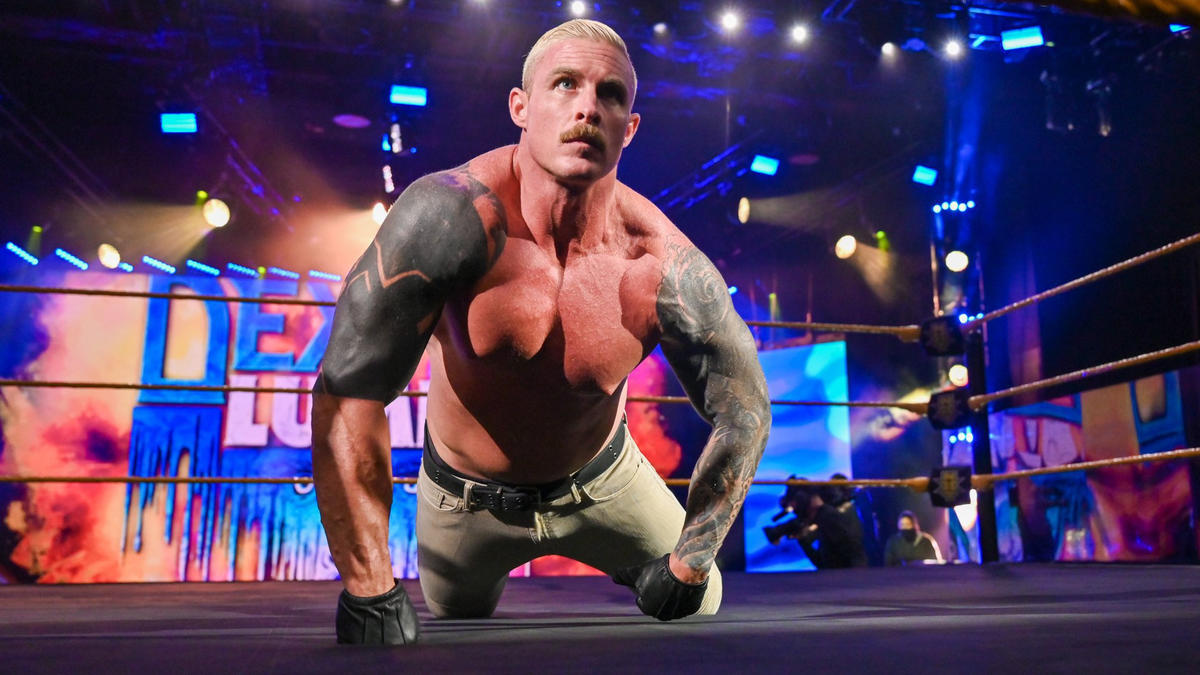 NXT returned from commercial as Dain was still pounding down on Lumis. Lumis hit a Spinebuster out of the blue that allowed him to gain somewhat of an upper hand. Lumis followed up with a leg-drop followed by a Swanton-bomb but was soon the recipient of a diving cannon-ball at the hands of Killian Dain. This was a pretty cool opening match if you ask me. Lumis is always exciting to watch because he is so out there and Dain is a straight-up beast. Lumis ended up submitting Killian Dain for victory.

I give full props to Lumis, I was not expecting the amount of athleticism that he put on show on this week’s NXT. Keep your eyes on this cold-hearted individual, he has been making some serious tracks lately and I’m enjoying the journey.

McKenzie Mitchell caught up with Undisputed Era member, Roderick Strong, in the backstage area and revealed that Strong would be participating in a triple-threat match later in the night that would have NXT North American Championship implications. Strong mentioned that if he were to win the NXT North American Championship, that could be the resurgence of Undisputed Era. Strong said that “things have been weird” within the group lately and Strong was ready for things to get back to normal. Bronson Reed then walked on into Strong’s interview and straight up told Strong that neither Strong nor Undisputed Era deserved any championship opportunity because they have had their fair share of these opportunities over the past number of years in NXT.

I really like this approach by Reed, going straight for what he wants with no BS is the way to go. Reed said that Keith Lee gave up the North American Championship solely to create opportunities and Reed was determined to go after it. Soon enough, Johnny Gargano invited himself to this segment. Gargano is now calling himself the face of NXT – I can’t say I agree. Strong immediately walked out of the set and Gargano got in Reed’s face to say that this is all going to end with Johnny Gargano as the NXT North American Champion once more.

Ever Rise vs Breezango

The next match of the night was tag-team action in which Ever Rise took on the veteran team of Tyler Breeze and Fandango, AKA Breezango. This match was so entertaining as in the opening moments we saw, no only how great of a wrestler Tyler Breeze is, but also how funny he is. Breeze mocks his opponents just a much as he was kicking their asses. Fandango soon made his way into the match with an explosive attitude. 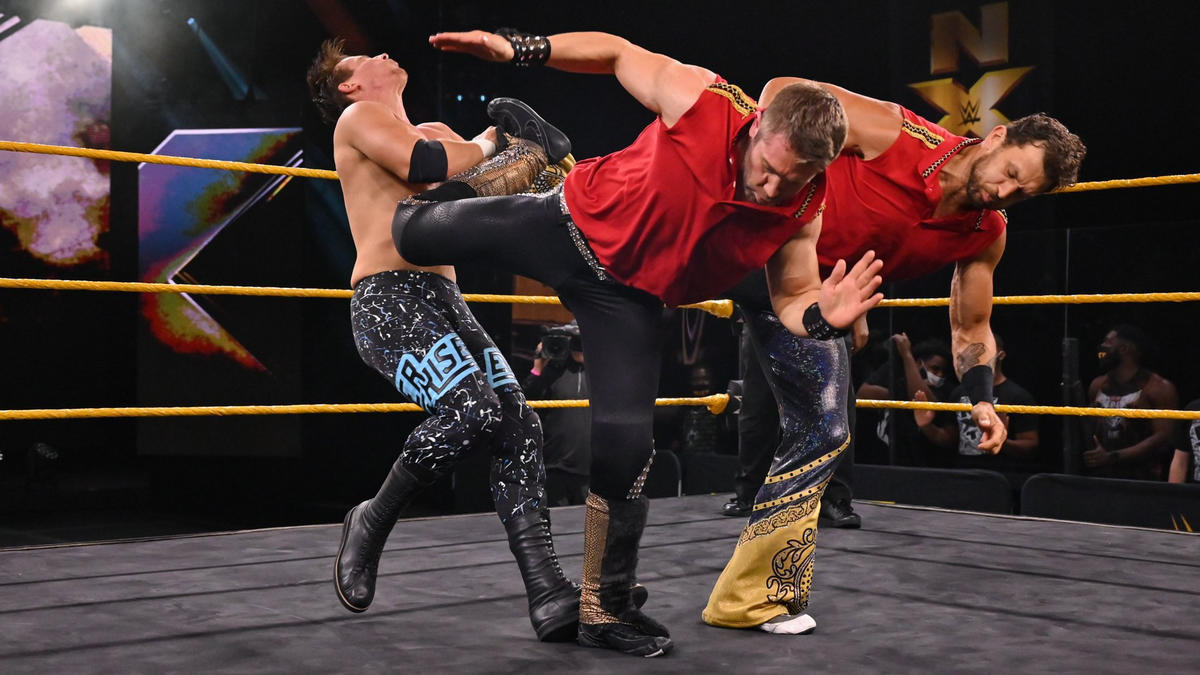 Fandango ran though each member of Ever Rise completely obliterating them. It wasn’t long until Breeze was tagged back into the match and picked up the pin-fall victory after the assist from Fandango with a double super-model kick to the opponent’s faces. With Breezango making quick work of Ever Rise now we have to wonder, do Tyler Breeze and Fandango have the NXT Tag-Team Championships in their sights? Let’s hope they do.

As we know from watching NXT over the past number of weeks, Shotzi Blackheart has had a bit of a feud going between Aliyah and Robert Stone. The opening moments of the match started off with Shotzi kicking the tar out of Aliyah. Personally, I’ve really enjoyed seeing the storyline unfold over the past number of weeks, particularly, seeing Robert Stone run away from Shotzi in complete fear – it’s been great to see Stone getting what he deserves! As the match continued, so did Shotzi’s relentless offence towards Aliyah. Aliyah did manage to get a few of her own shots in but Shotzi kept shutting Aliyah back down. 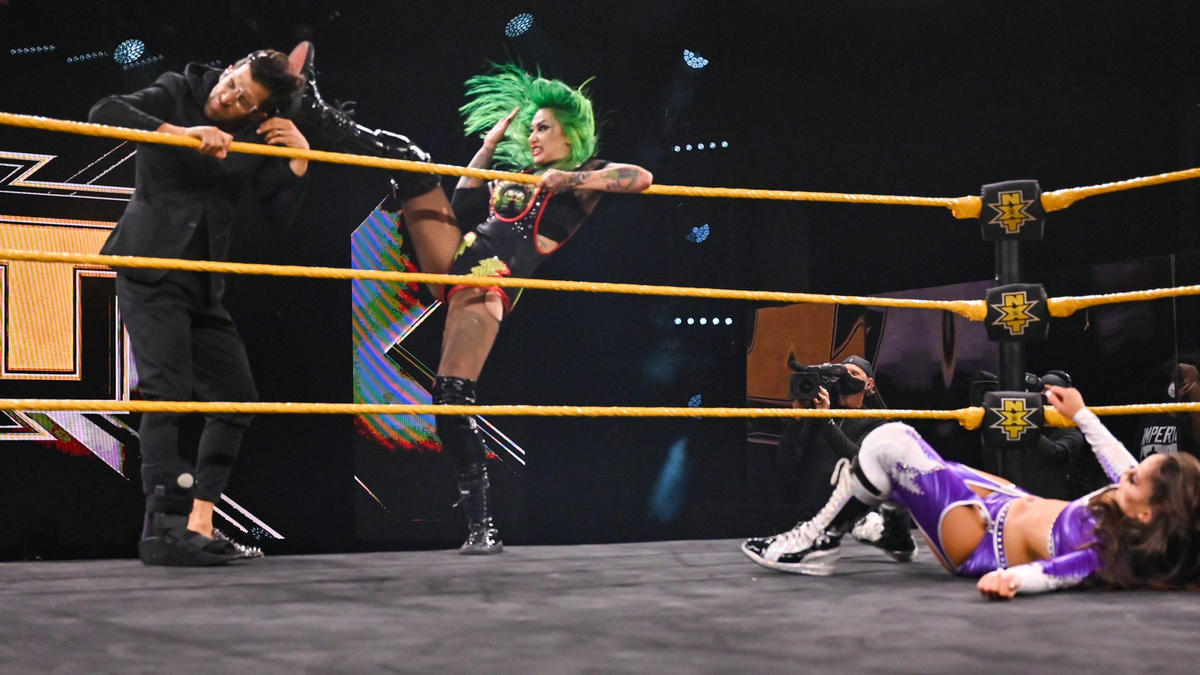 Later in the match, Aliyah managed to successfully complete a chin-lock submission to Shotzi but once again Shotzi gained the upper-hand. At one point Shotzi hit Aliyah with an exploder suplex that looked like it would end the match early. Shotzi was ready to take from the skies as she stood on the apron before climbing the turnbuckle. Before she did, Stone got himself involved once again and happened to perch himself atop the same stretch of ring apron that Shotzi was on. Needless to say, Shotzi nearly decapitated Stone with a strong kick to head, knocking Stone to the ground which left him screaming (again). Shotzi then made her way to the top rope, hit Aliyah with the diving senton and picked up the pin fall victory. 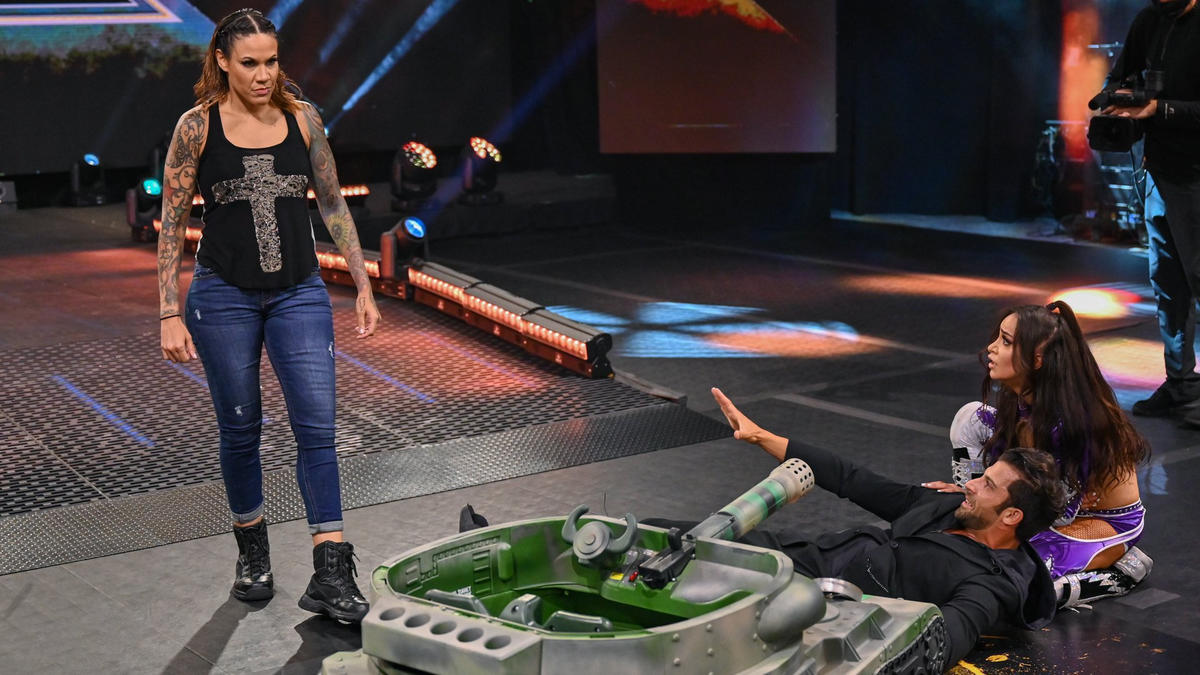 After the match, Shotzi jumped back into her tank and drove over Stone’s leg – like she did a number of weeks ago. That’s a strange sentence to write but a damn entertaining thing to watch. Unfortunately for me, but more importantly, Shotzi, the fun was brought to an end when non-other than the recently returned Mercedes Martinez appeared from out of nowhere and knocked Shotzi out with a kick to the head. Mercedes looks to have aligned herself with Robert Stone – nothing has been announced so we will have to tune back in next Wednesday to see how this unfolds.

The next match of the night was a triple-threat qualifying match to progress to the next round for the NXT North American Championship. The match started off with Bronson Reed exhibiting his brute force and soon enough, Reed was left as the last man standing in the ring. There’s a reason they call him Oz-Zilla. Strong and Gargano soon made their ways back in the rispong but it proved that one Bronson Reed was all it took to take and maintain control of two former NXT North American Champions, Johnny Gargano and Rodrick Strong. When NXT returned from commercial, unsurprisingly, Bronson Reed was still cleaning house! While this was in fact a triple-threat match, Gargano and Strong were forced to join together in attempts to take down the big man. 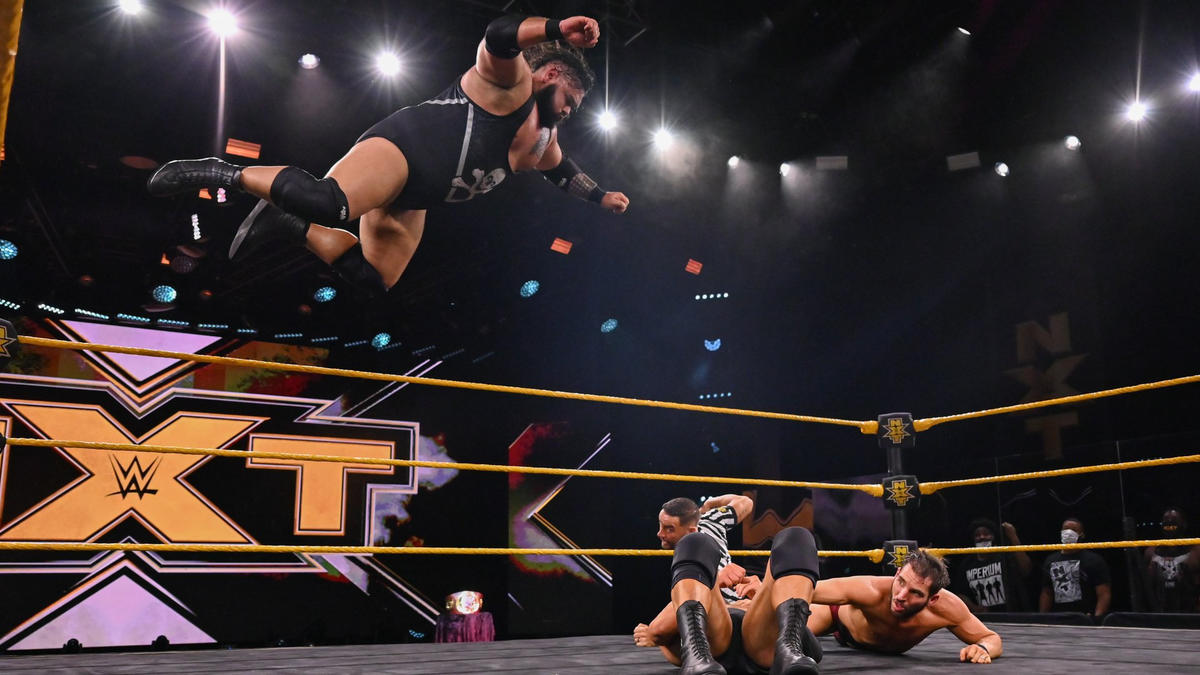 It wasn’t long until Reed was taken out of the picture. Gargano and Strong were left the fight it out one-on-one while Reed was laid out on the outside of the ring. To the disbelief of both Gargano and Strong, Reed was quickly back to his feet and back to controlling the narrative of this match. Later in the match, Gargano and Strong were fighting outside of the ring until Reed came flying through the middle rope, crashed to the ground, and crushed both of his opponents in the process. Towards the end of the match, it looked like Gargano had this in the bag after hitting his ‘One Final Beat’ DDT to Strong, leaving Strong laid out. Gargano went for the pinfall but just after the count of one, Reed had thrown himself off the top rope and hit Gargano with a monster splash! Bronson Reed successfully pinned Gargano for the three count and is now one step closer to the NXT North American Championship.

This match was sure to be a slugfest from these two extremely hard-hitting competitors. Thatcher, who believes that he is the greatest technical wrestler on the planet, controlled the first half of the match. He continued to force his bodyweight upon the shoulder of Lorcan to ramp up the amount of damage in the hopes a submission opportunity would appear. Thatcher soon began to target the neck and lower back of Lorcan and successfully kept Lorcan close to him well aware that the closer he kept Lorcan to his body, the less chance Lorcan had of landing any strikes. 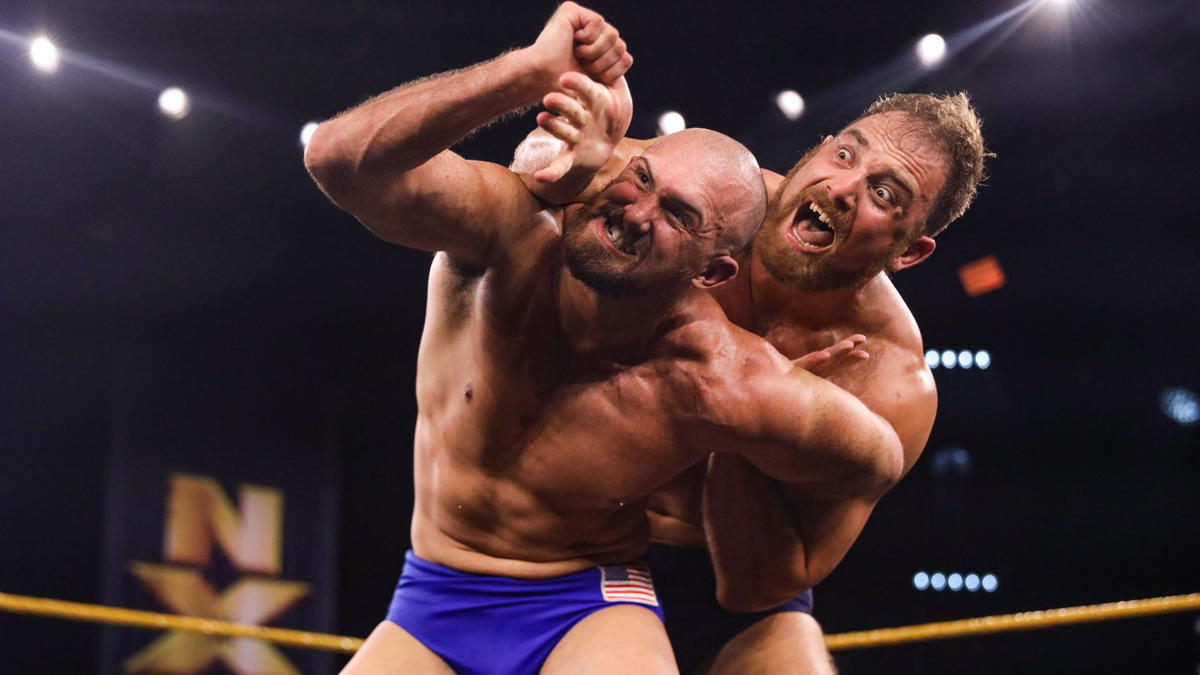 Lorcan was enduring a lot of damage at the hands of Thatcher and soon enough found a window of opportunity to create an opening. Thatcher and Lorcan made their way outside of the ring where Lorcan drove Thatcher shoulder-first into the steel ring post. When NXT returned from commercial, Thatcher was in complete control once again — this guy is a damn machine! Thatcher landed forearm after foramen to the face of Lorcan, once again in full control. The match ended in controversial fashion as Lorcan had managed to get Thatcher into a submission, however, Thatcher arched his back upwards, causing Lorcan’s shoulders to touch the mat for the three count pinfall!

The main event of this week’s NXT was a big one. Dijakovic had the chance to get his hands on Karrion Kross after the mind games and physical attack that took place backstage on last week’s NXT. This match kicked off with these two behemoths, fully displaying their pure power and strength from the opening bell. The beginning moments of the match showed Cross in complete control, with Dijakovic in the palm of his hands. Since Kross debuted on the black and gold brand, we have not often seen him in a position of vulnerability. Dijakovic however, reversed a number of attacks from Kross and quickly sent Kross flying out of the ring. It really was unfamiliar territory to have Kross thrown out on his ass like that because of that fact that, in recent weeks, he had been decimating anybody that got in his way. Unluckily for Dijakovic, Kross wasn’t down for long. 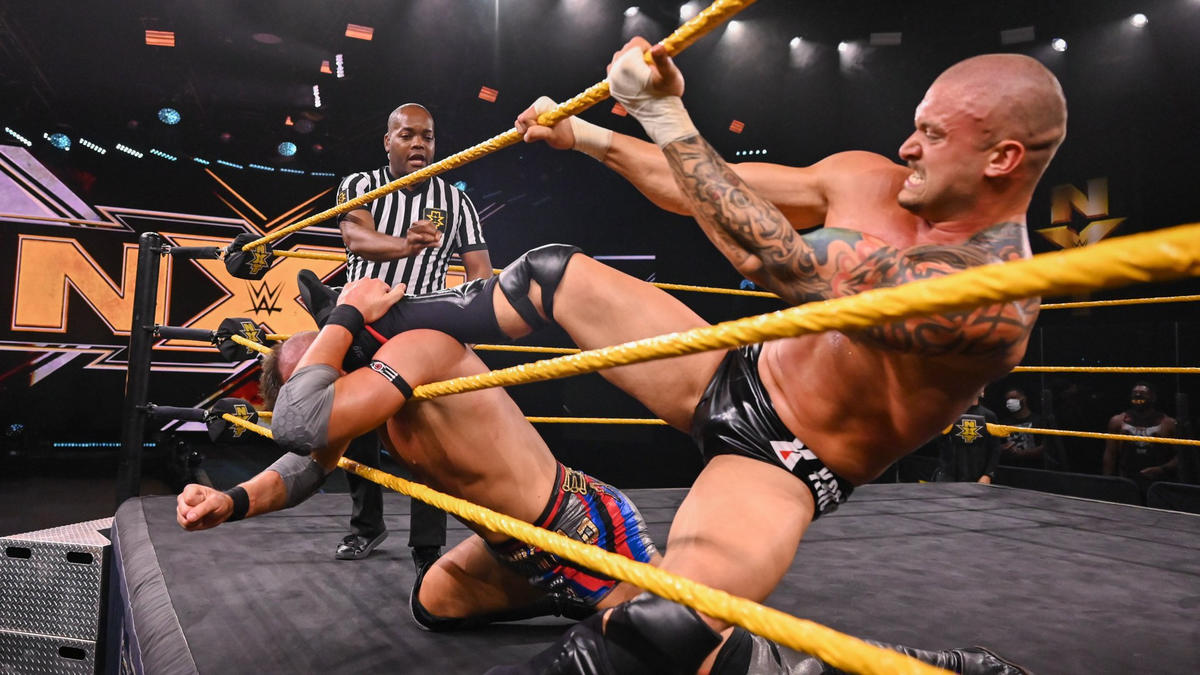 When NXT returned from commercial, Kross had spiked Dijakovic with a devastating DDT. Kross was soon looking to close this match his signature ‘Kross-Jacket’ but was met with a strong right hand to the jaw from Dijakovic. Dijakovic was determined to be the man to put an end to Karrion Kross’ undefeated streak in NXT. The fight made its way outside and Kross sent Dijakovic neck first into the steel steps. Kross then had Dijakovic’s head lodged next to the steps and drove hit boot into the steps, crushing Dijakovic’s skull! Kross then grabbed his opponent’s limp body as the NXT recruits in the crowd booed the dirty tactics of Kross. Kross then looked as if he was closing in on victory until NXT Champion, Keith Lee walked down to the ring to be there for Dominik Dijakovic. Kross then locked the ‘Kross-Jacket’ in as he screamed at Lee to watch as Dijakovic passed out. Karrion Kross conquered Dijakovic in a brutal fashion.

Scarlett met up with Kross after the match beaming with pride, it really makes you wonder is there anything that this dark-minded duo won’t do to secure a victory.

We also have to wonder how will the Kross / Lee saga unfold going forward.

For all things wrestling check out www.sportsobsessive.com!