This week on Impact, Heath opened things up with his opportunity to earn a spot on the Impact Wrestling roster. Heath was informed last week that he would have to defeat Moose to earn a contract. Moose confidently made his way to the ring and stared into Heath’s determined eyes; a man who wanted nothing more than to become an official member of the roster. The match started strong, with Heath looking in the best shape that I’ve seen in years. Heath brought the attack to Moose and soon sent Moose flying over the top rope in a matter of moments. The match made its way outside, where Moose came across to be very comfortable. Heath took control of this match (and his future) as he viscously defended his name against Moose.

Heath came off well during this first half f this match, however, Moose displayed his dark-side as he showed no remorse in brutally attacking Heath. It was touch and go for a while as to whether Heath was going to prove his worth within Impact Wrestling, as Moose constantly stopped Heath from even getting going throughout this match. Later in the match, Heath managed to come close to victory on multiple occasions, getting a number of close, two-count pinfall attempts on Moose. Heath went on to inadvertently take out the referee but still followed up with his signature move ‘The Wake-Up Call.’ This was followed by a pinfall that would have counted ‘3’ many times over, but there was no referee to officiate the pinfall. Heath had clearly earned his spot at the junction of this match. Moose crawled toward Heath and hit him with a low blow! Soon enough, the referee crawled to position and slowly counted to three, giving Moose the pinfall victory.

Next up in my Impact wrestling review, the newly crowned Impact Wrestling Tag-Team Champions, The Motor City Machine Guns, met with Jimmy Jacobs for an in-ring interview. Shelly and Sabin were questioned as to why they returned to Impact Wrestling at Slammiversary. The pair agreed that whilst it has been eight years since they last wrestled and tagged together in Impact Wrestling, they have been training together and never lost that spark that they have as a team. The pair soon named off many of the current tag-teams in Impact, complimenting them in the process. MCMG then brought up The North, the very team of whom they defeated at Slammiversary to become Impact Wrestling Tag-Team Champions. Ethan Page and Jos Alexander’s ears must have perked up backstage because they made their way to the stage in a matter of seconds.

The former champs interrupted and Alexander was quick to say that MCMG were given a championship shot far too quickly upon returning. Page grabbed the mic and lost his mind!  Page went on to say (and shout) that MCMG beat The North at 40%. Page continued by saying that he and Alexander would compete week in and week out, putting their bodies on the line every single week to show the world that The North are THE best Tag-Team in all of wrestling. Page added that when The North said that they decimated the entire tag-team division, he meant it and if you’ve been watching Impact Wrestling for the last year, you can’t argue with a single word of what Ethan Page had to say. Alex Shelly of MCMG responded by granting The North a rematch for the Tag-Team Championships. Shelly confidently challenged The North right then and there. At that moment, The North argued that fact that they were not ready, as they should be at 100%.

The rematch will go down an Impact’s next pay-per-view event, Emergence.

As the night rolled on, we saw The Good Brothers, Karl Anderson and Doc Gallows, in the parking lot, headed towards their vehicle. Anderson and Gallows quickly copped that the driver’s seat was wide open and there were empty beer cans scrunched on the ground, next to the vehicle. As the pair were trying to figure out what was happening, knowing it was a set-up, police officers soon approached Anderson and Gallows. Clearly, it looked as if The Good Brothers were drinking in public, perhaps intending to drive, so the cops were getting ready to book them. Ace Austin came running onto the scene like the little weasel that he is and began taunting The Good Brothers and kissing up to cops. 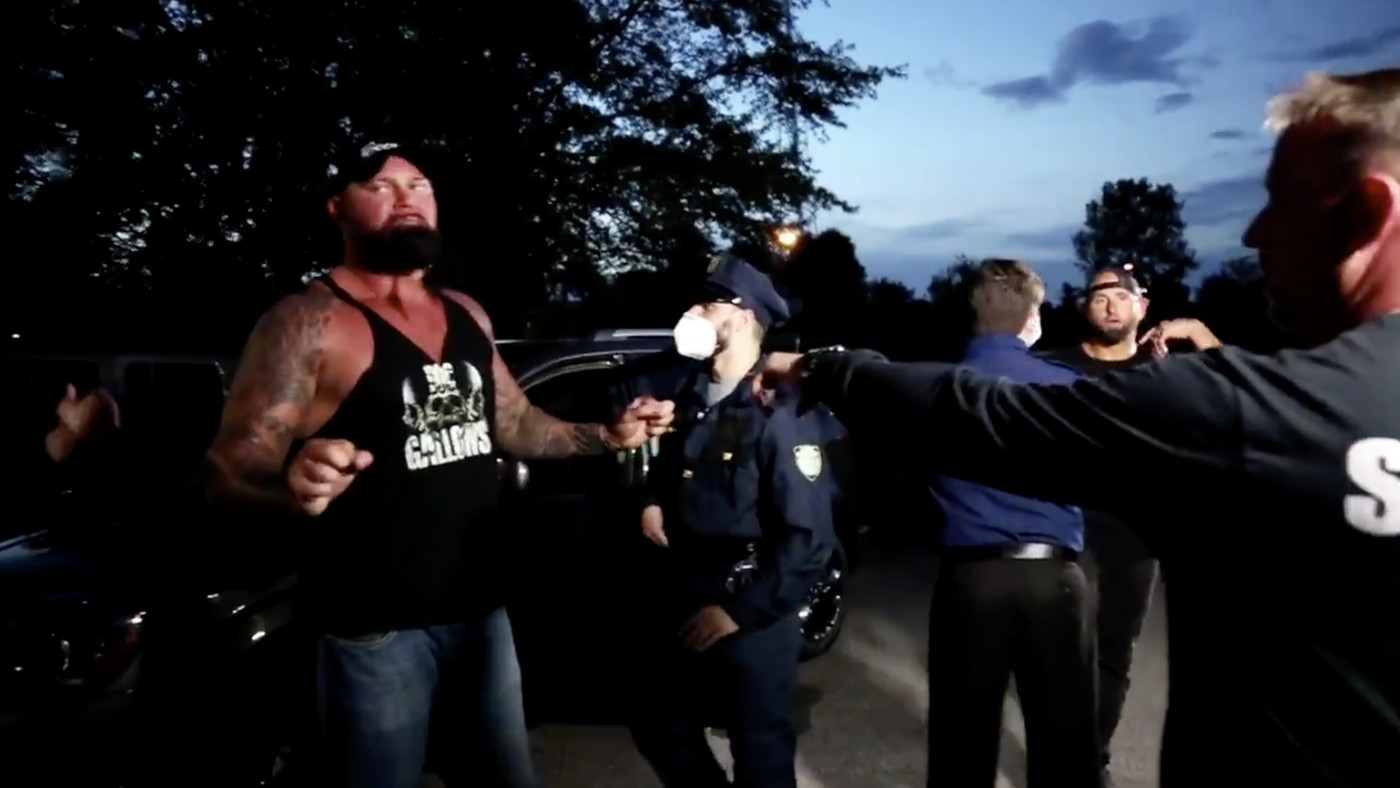 Gallows put his hands on Austin because he knew Austin had gotten himself and Anderson into this situation. Austin’s right-hand man, Mad Man Fulton, jumped Gallows from behind and Gallows fought him off. Gallows had someone else put his hands on him next, assuming it was Fulton, Gallows hit a strong back elbow, inadvertently hitting a cop, which obviously ended up with Gallows getting arrested!  Austin and Fulton were extremely happy with themselves after this and understandably so. Going by the look on Anderson’s face, however, the night was far from over for Ace Austin and Mad Man Fulton.

Eddie Edwards’ quest to be a fighting Champion for Impact Wrestling continued this week as he made his way to the ring to take on a surprise opponent. That opponent ended up being none other than Sami Callihan. However, as Callihan made his entrance the stage, he was attacked by a steel chair-wielding, Rob Van Dam. This seemed to be a continuation of what we saw last week on Impact where Callihan poked fun at Van Dam’s wife, Katie Forbes. After being beaten down by Van Dam, Callihan picked himself off and limped down to the ring to accept the open challenge for Eddie Edwards Impact World Championship. It wasn’t long until Callihan shook off the attack from Van Dam. Callihan brought a flurry of attacks to the champion, momentarily including a pile-driver on the apron taking Edwards out. After scrapping on the outside, the match made its way back into the ring where Callihan continued to decimate Edwards for the majority of the match.

The two men ended up trading blows in the middle of the ring, Edwards even hit Callihan with a Blue Thunder Bomb but Callihan managed to kick out at two. Later in the match, Callihan’s frustration kicked in as he introduced a steel chair into the match. Callihan looked like he was going to decapitate Edwards with the chair but then seemed to have a change of heart. This was enough of a distraction for Edwards to take advantage, as he hit Callihan with his signature Boston Knee Party followed up by a second to the back of the head and that was all she wrote. Edwards picked up the pinfall victory and retained his Impact World Championship while proving that he is in fact, a fighting champion.

This match started off with Bey locking up with TJP. This was an impressive match from the offset purely from the atheism displayed from the opening bell. Bahh was soon tagged into the match. A lot of tag-tag moves ensued from this point, giving Bahh and TJP the upper hand in this tag-team match. As the match continued there were a lot of tags made and a ton of damage inflicted. Rohit and TJP found themselves as the legal men and at this point, TJP was desperate for the tag to Bahh but Rohit wouldn’t allow it.

Rohit grounded TJP and made a quick tag to the fresh Chris Bey. TJP hit a desperation Hurricanrana followed by a tag to Fallah Bahh. Towards the end of this match, TJP was the legal man and had attempted the Three Amigos, Triple Suplex. Afterward, Rohit interrupted until Fallah Bahh intervened just as Bey was mid-air performing a springboard attack, which TJP successfully reversed into a submission move. TJP tapped out the current X-Division Champion!

Swann was the victim of a brutal attack from the hands of Eric Young at Slammiversary a number of weeks ago, the same night that he returned from a major injury that occurred back in January. Swann documented how, back in January, medical personnel told him that he would walk with a limp for the rest of his life and how he would never wrestle again. Swann proudly told the story of how hard he worked to prove those doctors wrong to become the best wrestler that Impact Wrestling had ever seen. Swann spoke about how he could feel himself getting bigger, better, and stronger along with how he met up with his doctor a month after the injury and proved that doctor wrong through his rehabilitation work. Swann explained how much his participation in the main event of Slammiversary meant to him and how hard he had to work to get there. Swann then spoke about how Eric Young’s hate and jealousy ruined his seven-month rehabilitation through the brutal attack that Young put Swann through. Swann was told that this time, it will be different. This time, he will not recover well enough to wrestle again. Swann was on Impact Wrestling this past Tuesday night to make the announcement that after 15 years, for his and his family’s sake, he must retire from professional wrestling. Swann proceeded to thank all of his supporters and all of his peers for doing what they do week in and week out.

As Swann stood in the ring, the entire locker room supported him by surrounding the ring and applauding the career of Rich Swann. Swann was still on crutches at this point, and slowly made his exit from the Impact ring with the help and support of his peers. Swann began his final walk up the ramp whilst those applauded him. Once Swann made it to the top of the ramp, he took one final look down at the ring, at his peers, and at what has been his life for the last 15 years. Swann took a deep breath and, in an instant, Eric Young had run out and brutally attacked Rich Swann once again! The roster ran up the ramp to Swann’s aid, but it was too late, the damage had already been done.

Thanks for following my Impact Wrestling Review!

Eric Young is truly living up to the moniker ‘World Class Manic.’

Keep up to date with all things wrestling at www.SportsObsessive.com