1995’s WCW Pay-Per-View Collision In Korea is one of wrestling’s most infamous events. Taking place in Rungrado 1st of May Stadium in Pyongyang, North Korea, a combined 355,000 citizens attended the two-day event. In Series 3, Episode 4 of Dark Side Of The Ring, we delve into the controversy and crisis behind what is described by narrator Chris Jericho as “one of the most bizarre diplomat missions ever conceived…which cast wrestlers as unwitting players in a high-risk act of political theatre.”

By 1995, North Korea was about a year deep into a communist dictatorship under Kim Jong-il, after the death of his father, Kim Il-sung. A repressive leader, Jong-il was responsible for Stalin-esque Gulag camps, the creation and ignoring of a famine thought to have killed as many as three million North Koreans, the suffocation of babies of pregnant mothers who tried to flee the country, and many more horrific and authoritarian policies.

The dictatorship bans any form of governmental defiance. In addition, they are very hostile to any external visitors, letting very few in and ensuring all activities strictly follow policy. Of those very, very few who have attended, these are largely politicians or diplomats but with exceptions such as presenter Michael Palin, basketballer Dennis Rodman, and writer Christopher Hitchens. It is essential to highlight how few non-North Koreans have ever visited. This is because those who enter can very rarely ever leave again.

In this edition of Dark Side of the Ring, then-WCW Vice President Eric Bischoff tried to explain how he could justify an event that went where no commercial wrestling promotion has ever gone…and no one has ever gone back to.

Why Go To North Korea Anyway?

As Bischoff asks in the opening: “What could be more international than having two big shows in Pyongyang, North Korea? Vince McMahon couldn’t do that!”.

To reach a wider global wrestling audience, Bischoff re-established a previously failed relationship with New Japan Pro Wrestling. Bischoff commented that previous connections between the two promotions had left “a very bitter taste in their mouth in terms of doing business with Americans.” Bischoff did indeed more consistently bring over Japanese stars for WCW programming, including such names as Jushin Thunder Liger and Ultimo Dragon. Furthermore, WCW talents like The Steiner Brothers and Scott Norton fought in Japan.

Antonio Inoki asked if Bischoff wanted the WCW roster to compete in North Korea to wrestle in a “peace festival”.

As to why Inoki could set up such an event, Inoki had become one of the most high-profile figures in all of Japan. A politician, Inoki even negotiated the release of Japanese hostages in Iraq. Now, with his plans in North Korea, he wanted to eclipse previous events in terms of creating international relations. Inoki frequently visited North Korea, and on one visit he pitched a wrestling event, to which executives and officials formed a committee and planned Collision In Korea for the next April, the anniversary of Jong-il’s birth.

“World famous” celebrities were wanted for the Collision In Korea event, with the name Michael Jackson being brought up. Muhammad Ali was chosen and was excited to go, having given up his life to fighting for various causes.

On the flipside, Hulk Hogan was asked but sternly and quickly refused the invite. The second choice, Ric Flair, accepted in his place.

Scott Norton was told the plan by a Japanese legion of wrestlers, to his surprise. He was also shocked by Ali’s appearance, as he was doing magic tricks to try to calm the nerves of the wrestlers. 2 Cold Scorpio was amped to travel. Bischoff said “I’m just going to go”, even without his boss’ permission.

Leaving On A Jet Plane

Flair lost it at the state of the plane, Scott Norton tells us. Scorpio recalls seeing the barrage of weaponry pointing overhead.

Scott Norton remarks “There’s nobody…it was caked inside…Nobody’s been in this room forever.”

Norton violently had his bag taken off him, alongside his Walkman and other American technologies. Wrestlers were in awe at their passport seizures. Paired in twos, they were assigned a special guard to survey them 24/7. Whilst being driven to the nation’s capital, Norton’s guard told him he was the “seventh American to step foot in North Korea that hadn’t been shot down or captured.”

The WCW wrestlers were forced to lay flowers for the deceased Kim Il-sung, used for propaganda material. Hotel rooms were high up, seven flights of stairs needed to reach them. Still under surveillance, all they could do was watch TV, of which there were three channels—all pro-governmental political shows.

For something, anything to do, some of the wrestlers played pool. After taking two hours to get the balls after military clearance, Scott knocked a ball off the table onto the floor. They confiscated the balls, to which tensions rose.

Bischoff went for a run. The streets were completely deserted until the public started to flood the streets, to which the alienated Koreans were startled, with children “terrorised” from the sight of an American.

On the trip, Flair rode with Hawk.

Flair and Scorpio had heat over “The Nature Boy” allegedly being the cause of a previous firing of Scorpio. Riding the bus, Flair looked around for someone, until Hawk made his presence known. Scorpio declared to Hawk, who thought Flair would travel with him, “Fuck that pussy, let him [Flair] ride by himself.”

Hawk reacted by swinging at Scorpio until the former ECW Television champion hit back with a number of punches that dazed the ex-Road Warrior. As Hawk bled, the Japanese wrestlers held back Scorpio until Hawk re-instigated the brawl. Scorpio had Hawk’s eye “halfway out of the socket” before giving him a kick in the face. Norton stated a “regular Hawk would have kicked his ass” but the hepatitis-suffering Hawk was worn out and weary with his condition.

After a visit to a sacred temple, Scorpio apologised before Hawk swung around and decked 2 Cold.

Later on, Scorpio grabbed some stainless steel chopsticks, which he brought back to the hotel room and sharpened on the windowsill of his room, fashioning it into a shiv. Roommate Benoit tried to persuade him to not do so. Scorpio could have murdered Hawk in North Korea.

With a few more hours until departing time, Hawk and Scorpio get into it after the event. In an escalator, Hawk is said to have backed out of a fight.

Of course, this is largely from Scorpio’s perspective, who will be keen to put himself in a good light. Norton, who was semi-present too, adds to this but we question how reliable that will be. Scorpio’s account may be biased but no one else may ever know the truth now so this is the version that must be believed.

Norton was interrogated by officials after a phone call in his room calling the country a “shithole” and destroying the telephone. He stated: “They could(n’t) care less if I lived or died.” They threatened him, with various officers with rifles standing over him as the head honcho gave him a once-over about his negativity to the state.

It was not unlikely that for his illegal comments that criticised the country he could have been straight-up executed there and then.

Luckily, Norton was spared his life but given a stark warning.

Collision In Korea: The Event

On the way there, the driver explained that the huge crowds, two lanes of them, were all there “because if they don’t show up, they get a bullet in the head.”

Before the matches commenced, there was an unbelievably intricate, pompous, and grandiose display. A huge propaganda piece, it was—as you would imagine—astonishingly over-the-top.

The first few matches played out to silence. A pin drop could be heard, prompting Hawk to cuss the crowd out prior to his bout. Simply, nobody knew what they were watching or why. Collision In Korea was eerily cold.

The biggest responsibility for gaining fan reaction was Antonio Inoki’s, the organiser of the event in the first place. It was a tribute to his mentor Rikidozan. A Japanese icon, Rikidozan was actually North Korean-born, albeit when it was under Japanese occupation. The reasons surrounding Rikidozan’s death are unclear, with the documentary noting Japanese gangsters in a bar is a common story. More specifically, the Yakuza killed him for lying about his North Korean heritage and becoming popular as faux Japanese. This story made him a figure of mythology, dying as a martyr for North Korea—pleading his dedication to the country in his final breaths.

During the main event between Antonio Inoki and Ric Flair, Inoki is recognised as the hero by the audience. Halfway through the match, commentator Mike Tenay remarks: “We hear the crowd for one of the few times at Collision In Korea, really responding to Inoki.” Finally getting some kind of reaction, the crowd eventually came unglued when Inoki triumphed, slaying the beast to get a huge reaction.

The men were honoured with vases and flowers. 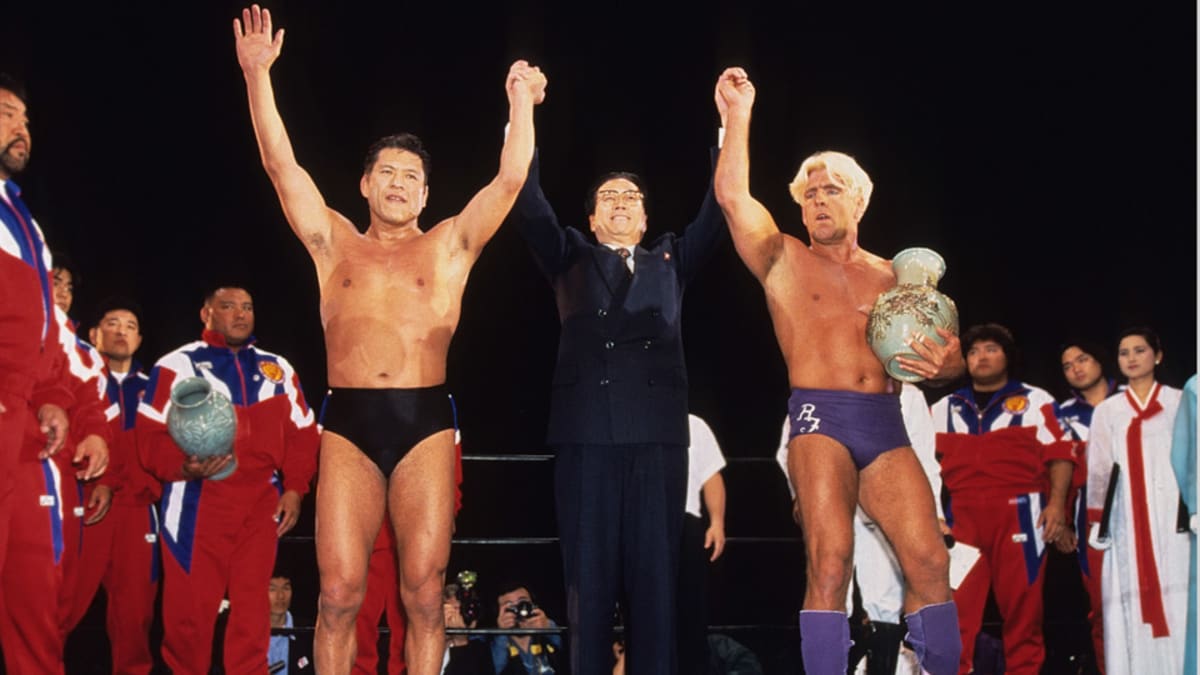 As Scott Norton put it: “These people were entertained for probably the first time in their li[v]es…That was the greatest match that has ever happened in this business…ever.”

On the way back, many talents just seemed grateful to return home, tired after living in a different civilisation for even a brief amount of days. There was even panic as they did not get their passports until just before leaving time.

Touching down, Flair—himself nearly not allowed to leave the country after making a somewhat disobeying speech (a point not covered in the episode)—is described as having “kissed the pavement” in excitement whilst wearing his multi-thousand dollar clothes.

The event failed to energise the political career of Inoki, who was not re-elected and left politics behind, for then at least.

Narrator Chris Jericho draws similarities between North Korea and wrestling, both as “masters of blurring the lines between fantasy and reality.”

Norton explained that Collision In Korea was itself a spectacle: “The show itself was super cool, meeting Muhammad Ali on top of it…so being a part of that was absolutely awesome.”

Scorpio spoke about the gigantic amount of present fans, saying “That’s the only thing I can ever brag about to Hogan, that I have done something he has not done. ‘Cause I wrestled for 199,000 people two nights in a row, not one—and that’s all I got on him!”

Bischoff described any other sporting event as “pale in comparison” and knew that Vince McMahon was “livid” that there was a wrestling event that drew a bigger house than WrestleMania. He closed out by commenting: “Largest wrestling event in the world? Yep—I did that.”

Collision In Korea will likely forever go down as wrestling’s most controversial show. Even WWE’s forays in Saudi Arabia after Jamal Khashoggi was nowhere near this show in terms of bizarre and unbelievable locations for a wrestling event.

Entering a completely shut-off communist nation under authoritarian rule on a peace mission was a totally strange scenario. Whilst wrestlers’ lives were hell there and the payoff barely worth it, it was certainly a once in a lifetime experience—and one for which they were thankful when they touched Japanese land on return.

We will never see the likes of wrestling in North Korea again. That is, of course, unless Vince McMahon ever wishes to break the one record Eric Bischoff holds over him.