Freshman year for Cole Anthony at North Carolina didn’t go quite as planned. The 5-star high school recruit battled issues from both within and without himself during his one year at Chapel Hill. There are, however, a few facts about Cole’s tenure that are approaching consensus:

1) He was not optimized within North Carolina’s system, which saw him cast as the primary engine of an offense that couldn’t get out of its own way or, more specifically, Cole’s way. Spacing was dismal, with Anthony playing in lineups in which he was the most credible three-point threat. Cramped paints and tight passing lanes were the norm.

2) The reality of the meniscus tear which would color the second half of Cole’s season, adding a confusing variable to the existing discussion about a potential drop-in explosiveness/separation at the next level.

The 2020 draft may be short on primary creators, but it’s chocked full of guys who were primary playmaking engines on the college level but will need to find new roles as off-ball /side pick n’ roll/ secondary creator types in the NBA (albeit with a degree of ‘fingers crossed’, primary upside optimism). Cole had some rough stretches at UNC, not all of which can be blamed on Roy Williams or his right knee. The shot selection could be ambitious, to say the least, and his passing never approached anything you’d call “advanced”. He could be careless in the half-court, struggle at times to read defensive rotations, and take disadvantageous driving lanes which helped no-one.

Cole is predisposed to the shot over the pass, and coming down the court and eyeing his options at North Carolina certainly didn’t help. What’s important is how Cole will project at the next level where he will find himself, at least early on in his career, playing more off-ball alongside a primary playmaker. Will the concerns about his decision-making amount too much or, more directly, will they proportionally outweigh the particular flaws in other similar prospects transitioning from primary initiators in college to NBA secondaries? It’s hard to find too many examples from Cole’s tenure at UNC that don’t suffer from the pangs of spacing. But is his tendency for forced shots and tunnel vision hardwired or reactive? Will he ever have the juice as a primary playmaker to be able to see a possession holistically? Will he ever need to be?

Anthony will benefit from a simplified role at the next level, and he’s a perfectly capable one-decision passer. I have little doubt Cole will enter the league able to split a pick n’ roll, read the help, and make a simple read. In the rare instance at UNC in which Anthony would receive the ball on the catch facing a leveraged court, he showed the ability to diagnose the weakness in the defense’s rotations.

If Coles’s playmaking potential remains unwritten, his shooting upside might as well be etched in stone.  Anthony is a SHOOTER, stats be damned; dribble hand-offs…splash, coming off motion…splash, and most importantly compared to similar prospects in this class, off the dribble…splish, splash.  There might not be another guard in this class capable, day one, of hitting pull-up jumpers against drop pick n’ roll like Anthony. In a draft littered with flawed jumpers, Cole is consistent, compact, and quick, equally on-balance regardless of range or shot-type.  He is a strong finisher, literally, while not having the kind of elite strength needed to move NBA players at the point of contact. He is, however, big enough (Cole is listed at 6’3) and strong enough to not get bumped off his spot. Though he flashed high levels of craft at UNC when the lane was open enough to permit it, Cole’s ‘at the rim’ numbers were not great and get even worse when you factor out transition buckets. While Cole’s shooting numbers were depressed by the weight of his offensive load and heroic late-clock efforts, that logic doesn’t extend to his finishing numbers, raising questions about how he’ll fare against NBA length and athleticism. Cole only had three dunks in 22 games. 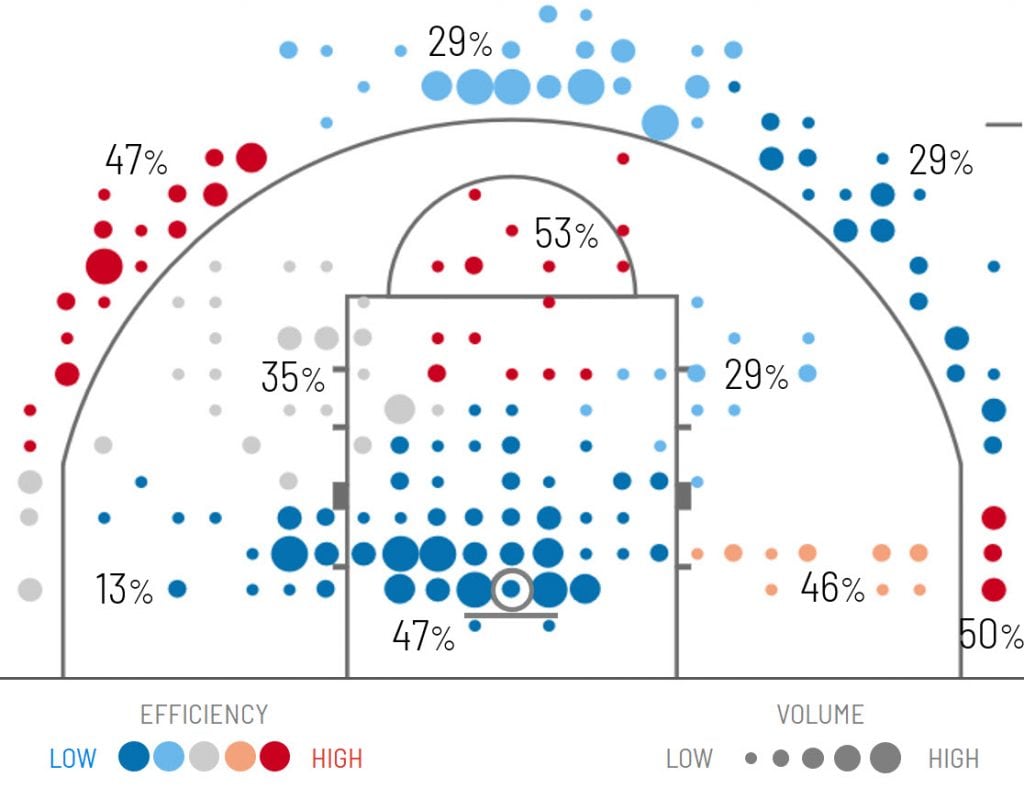 Whatever difficulties Cole had to confront at UNC, I was struck over and over that, despite the situation and expectations, he remained so engaged possession by possession regardless of the outcome. In this way, he represents the polar opposite of the Anthony Edwards collegiate experience, similarly touted and given the keys to flawed NCAA teams. Nowhere did Cole’s effort manifest itself more purely than in his rebounding numbers, boasting a DREB% of 16.4.as a 6’3 PG.  For a little context, Cole Anthony grabbed a larger percentage of available rebounds than 6’9 Jaden Mcdaniels, uber-athlete Anthony Edwards, and “rangy” Devin Vassell.  Marry this energy and effort with defensive awareness and you can see why Cole was the best rim-protecting guard in the country. Anthony excels at weakside rotations and has the highlights to prove it.

On-ball, Cole projects as a one-position defender, but one who can hold his own, though he will need to improve his screen navigation and pick n’ roll footwork. Performing well in 1 on 1 matchups against fellow draft prospects Kira Lewis Jr. and Tre Jones, Cole has the strength, lateral mobility, and hips to hang at the point of attack.  While Cole’s man defense is solid, where he really makes a mark is off-ball. Cole has a command of all the little things that make for a good team defender—it’s what made him such an outlier rim-protector in college.  While all rookies face a steep defensive learning curve, coaches won’t have to worry about Cole’s feel within the team scheme.

The draft is a million-dollar exercise in wish-fulfilment; peculiar risks follow every prospect into the 2020 draft. So why not take the 5-star recruit, who battled adversity and, oh, just so happens to have a bankable NBA skill or two. Simply put, the road to being a contributing NBA player runs through shooting and defensive awareness, two skills Cole brings into the gym on day one. In a draft class full of theoretical players, Cole Anthony allows for the possibility to bet on the upside, without losing your shirt.

Shay lives in New Orleans and writes about Basketball and other American arts.